OERs and MOOCs have raised tremendous interest by higher education institutions worldwide. They are seen as a means to increase the accessibility and quality of higher education. The European Commission expects that open education will be a means to develop 21st century skills and to address the problem of early school leavers and high rates of unemployment (of younger adults). On the other hand, there is at the moment little guidance and orientation available for institutions that would like to develop their own strategy.

Listen to what Marco Kalz says about the expertise on OERs and MOOCs.

Meet our experts on OERs and MOOCs

Andy Lane is the Professor of Environmental Systems and External Engagement Lead in the School of Engineering and Innovation at the Open University in the UK. He is also currently the Academic Director for the TIDE international development project which uses open educational practices. Previously he was seconded as the founding Director of The Open University’s multi-award winning OpenLearn Initiative from 2006-09. He has taken a prominent role in the OU's work on Open Educational Resources and was the Senior Fellow in the Support Centre for Open Resources in Education at the OU from 2009-12. Internationally he has served as a Board member of the OpenCourseWare Consortium (now Open Education Consortium) from 2008-10 and been involved in a number of European OER initiatives such as MORIL and OER-HE. His research and scholarship covers systems of open education and takes the phenomenon of open education resources and extends that to open educational policies and practices and how that influences formal, non-formal and informal education for both classroom-based and distance learning-based HEIs.

Frederik Truyen (°1961) has a Phd in Philosophy (logic) and is professor at the Faculty of Arts, KU Leuven. He publishes on digitalization, photographic heritage and e-learning for the humanities. He is in charge of CS Digital. He is experienced in data modelling and metadata development for image databases in the cultural-historical field, and currently works on digital transformation issues in then GLAM/CHI sector. He is the president of Photoconsortium, an international membership organization for photographic archives. Truyen is treasurer of the Europeana Network Association and a member of DARIAH-VL.

He currently directs the programme of the Master in Digital Humanities. In the Cultural Studies Master Programme he teaches online publishing and digital cultural heritage. His main research focus is the digital transformation roadmap for cultural heritage institutions. He has been involved in setting up the e-learnign envoronment for KU Leuven and in the development of a MOOC strategy.

Catherine Mongenet is professor in Computer Science. From 2009 to 2012, she has been vice-president of the University of Strasbourg in charge of the digital strategy. In May 2013, she was appointed Policy Officer at the French Ministry of Higher Education in charge of the project “France Université Numérique”. The aim of this national project is to support the French universities to develop online education and promote innovative teaching and learning methods using digital and online tools. She was responsible for the development of one major project is this agenda: the FUN MOOC platform, launched in October 2013 and dedicated to French and Francophone universities and their international academic partners. Since September 2015, she is the CEO of the public organization that has been created to carry on the FUN platform. The objectives of this organization are to manage the platform and its evolutions, to develop new partnerships and activities, especially in the context of life-long learning education and to increase its Francophone and international visibility.

Christian Dalsgaard is Associate professor at Aarhus University. His area of research is online education, and his fields of expertise includes open and flexible education, OER and MOOCs, and blended education.

Paz is a esearcher in philology and education projects: “European Short Learning Programmes”, “Data-Driven Learning (DLL) for the English writing competence improvement. Pilot experience in MOOC, bachelor degree and master degree”, and “Gamification and ubiquitous learning in Primary Education. Development of a map of teaching, learning and parental competences and resources "GAUBI”. Candidate for PhD Research Personnel Training Aid on the Languages MOOCs line of research: “A study about the use of MOOCs in foreign languages learning: framework, strengths and weaknesses”. Scientific contributions published in educational journal and conference proceedings in language learning and MOOCs language learning areas https://orcid.org/0000-0002-4095-7881

Esteban is a professor of the Faculty of Education in the Department of Didactics and School Organization. PhD in Education with Extraordinary Doctorate Award. Vice Dean of Students Affairs, Internationalization and Social Education (2017-20). Director of the Master's Degree in Educational Inspection and Supervision at UNED; his priority lines of research are: Mobile-ubiquitous Learning, Digital Language and Open and Flexible Education, with more than 200 scientific contributions published on these topics (see Google Scholar, Scopus and Publons). Currently, he is the Project Coordinator of the Research Project entitled: "Gamification and ubiquitous learning in Primary Education. Development of a map of teaching, learning and parental competences and resources "GAUBI". (RTI2018-099764-B-100) (MICINN/FEDER) financed by FEDER (European Regional Development Fund) and Ministry of Science, Innovation and Universities of Spain. Associate Editor of the British Journal of Educational Technology (JCR Q1). He has been invited as technical committee of more than 60 conferences around the Word (Japan, USA, Canada, Turkey, UK, Chile, Morocco, China, Italy, Puerto Rico, Czech Republic, France, etc.).

EMPOWER experts can help you to develop an open education strategy for your institution. This strategy development takes into account the educational, organizational, legal, technical, economical and last but not least quality assurance aspect of open education. More specifically, the experts can support you in questions related to open licenses, platform hosting, accreditation, target group identification, educational and didactical approach and questions of deployment and support. The approach followed by the experts is based on European values like diversity in terms of culture and language and openness.

The practical realities of participating in a MOOC

This webinar was organised by the Erasmus+ project ​MOONLITE​. Supported by ​EADTU, ​OpenupEd​, ​EMPOWER​, ​UNED​, Athabasca​ ​University​​ ​and​ ​​Linnaeus​ ​University​. 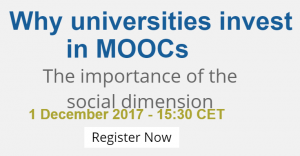 Why universities invest in MOOCs – the importance of the social dimension

Education for All has been a concept at the heart of international development since 1990 and has found its latest instantiation within the Sustainable Development Goals as SDG 4 ‘Ensure inclusive and equitable quality education and promote lifelong learning opportunities for all’. Open education, in the form of resources and practices are both seen as contributors to SDG4. The ambition is clear but the means to make it happen are not and a number of commentators have claimed that a power and systems thinking approach to making change happen is critical. This presentation (1) sets out the scale and scope of the SDGs; (2) reviews the potential contribution of open educational resources and practices to support the SDGs and (3) uses this framing of power and systems thinking to review the way open education activities might be fostered within tertiary education in all local, national and regional contexts in order to support the SDGs, and not just SDG 4. It will also tentatively outline a theory of change that brings together power relationships, systems thinking and open education as key components. By Andy Lane (OUUK)

Presentation
Creative use of Europeana content for open education

Europeana is Europe's main culture portal, with now about 50 million objects of Cultural Heritage, including; documents, images, videos and audio recordings. It is well known by Libraries, Museums and Archives as well as scholars for its trusted content. However, it is still underused in Education. Several factors make it an ideal tool for higher education. First of all, there is the quality: the cultural heritage objects described in Europeana come directly from the source, from the current holder, and have been digitized to high standards. Second, an ever growing part of it is available for public reuse, and openly licensed, as the European Commission pushes Cultural Heritage institutions to open up their collections. Thirdly, and this might be of growing interest, it shows Europe to its full diversity, in contrast to many current educational resources such as schoolbooks. It holds records from Central and Eastern Europe as well as those of Western Europe. Last, Europeana is transforming from a portal into a platform for reuse, educational as well as commercial. It wants to offer higher quality primary source material in a way that it can be integrated in educational apps, but also in an interactive way in online learning such as MOOCs. In this talk, we will discuss two examples from Europeana Space: creative reuse of Europeana content and the Europeana Space MOOC. By Fred Truyen, Clarissa Colangelo and Sofie Taes (KU Leuven).

presentation
Business models for OER and MOOCs beyond monetary incentives

OER and MOOCs can have multiple purposes and can bring a variety of returns on that investment. While there are costs associated with providing these free educational products and organizations might focus on ways to monetize the interest in their OER and MOOCs to offset those costs or provide revenue there is also non-monetary value to be gained from a variety of sources that expand the nature and range of business models for open education as both a producer and user. In this online event Andy Lane from The Open University UK, one of the EMPOWER experts and founding Director of the OUUK’s OpenLearn platform, will discuss non-monetary business models that variously involve enhancing brand awareness, extending the impact of research, enabling valorization of informal learning, encouraging partnerships between organizations, supporting capacity-building in communities and spreading the costs of developing OER. By Andy Lane (OUUK)

Currently MOOC providers report high drop-out rates ranging from 90 to 95%, meaning only about 5 to 10% of the MOOC takers is receiving a certificate when they enrol in a MOOC. However, drop-out is clearly defined from the perspective of the MOOC providers. MOOC takers may have other perspectives and to understand these perspectives their behaviour regarding MOOC enrolling should be studied. MOOC takers may have many reasons why they enrol in MOOCs and why they do not finish a MOOC. We distinguish two levels of the MOOC taker’s perspective, namely the level where MOOC takers are planning to enrol in a number of MOOCs because they have a personal curriculum in mind that they wish to complete. The other level is where MOOC takers are enrolled in a single MOOC as part of completing their personal curriculum. The presentation will go more in depth about these two levels. By Karel Kreijns (OUNL)

EMPOWER is carried out with the support of the European Commission, Dg EAC, under the Erasmus+ Programme, however, sole responsibility for this website lies with the EADTU and the Commission is not responsible for any use that may be made of the information contained therein.